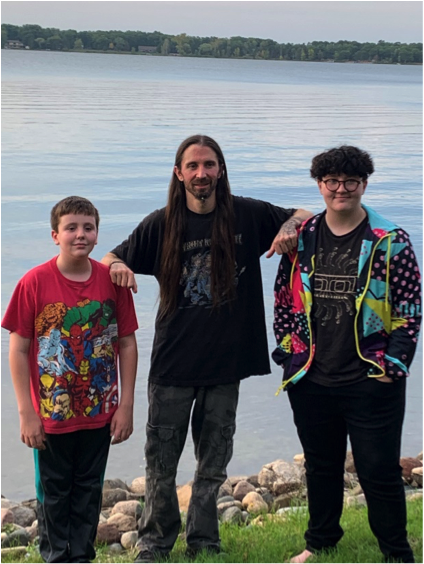 Andy, Marshall and Harley Fry are partnering with Lakes Area Habitat for Humanity to build STABILITY, SECURITY AND SELF-RELIANCE.

“I love my dad but I really look forward to the day when I don’t have to share a bedroom with him”.

Harley Fry’s words above are really simple on the surface but goes to the heart of what matters to him. Any 10-year-old boy wants…and should have…access to privacy and space to grow. Every parent wants…and deserves…to have space of their own as well.

All too often, this simple, basic request is missing for many in the Lakes Area. Andy Fry and his children are among them. And, for a long time, they had it all – dad and mom raising two growing kids in their own home. They lived the dream of owning a home. That all changed the day mom suffered from an aneurysm. Life spiraled downward to the point where the family separated. Andy on his own couldn’t afford to keep the home and after time, made a tough decision to move himself and his children into his parent’s home.

Andy works two jobs and plays in a band in an effort to make it. Still, it’s not enough. Now he’s looking forward to working hard with Lakes Area Habitat for Humanity to build his home and begin rebuilding his life with his children. For Andy and Marshall, the home means STABILITY & SECURITY; for Harley, it means PRIVACY.