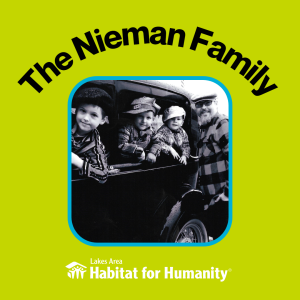 After growing up on a farm and graduating from Little Falls High School, Jonathan’s path to homeownership has been long, and long overdue.

Service has been and continues to be Jonathan’s mission.  Starting with a 1-month stint in Thailand through Youth With A Mission, Jonathan then enrolled in the US Army to serve his country. A knee injury during unit training led to a medical discharge and a wandering path through various degree pursuits, job pursuits and 3 adorable boys.

Each time Jonathan seemed ready to take on the responsibility of homeownership, another obstacle presented itself.  To Jonathan, the idea of homeownership became an unattainable dream.  Doing the best he can, he provides for his boys in a cramped 1-bedroom apartment.  He longs for the day when his boys will have the space to have independence; space to play and grow; space to help in the kitchen.

Until Jonathan applied to Habitat For Humanity, all that seemed impossible to achieve.  And, now with Habitat’s help, those dreams will become a reality.  He’s anxious to have a kitchen large enough so his youngest son can explore a budding passion: helping prepare and cook meals.  He’s eager to have a yard so his oldest son can enjoy the outdoors and dream of faraway places he reads about.  Or for his middle son to have some space to call his own.

These seem like pretty simple hopes and dreams.  With your help, Jonathan’s dreams will soon be a reality.