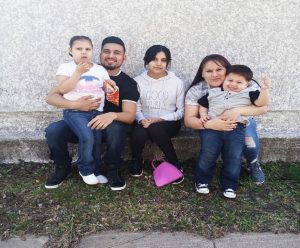 When Ashley became pregnant with their first child at age 15, her parents helped out.  A difficult time for anyone much less when a pregnant teenager.  Things turned dark for Ashley a few years later when her parents split up/divorced.  Her response to that was to connect with a crowd who did meth and so she began using.  She became pregnant with their second child while using & their daughter was born with the effects of that: Epilepsy and non-verbal autism.  Ashley more-or-less left Santiago & the two girls to be with her fellow drug users.

Santiago moved from Phoenix, AZ to MN to be with some of Ashley’s family in the Brainerd community.  It took Ashley a couple of years but she eventually followed and committed to life changes…after spending time in jail.  Since her release, she’s been clean and marks her Sobriety to the moment she became pregnant with their son: 4 years. Both Santiago and Ashley are joy-filled people fully devoted to each other and their children.

Ashley is the shoe department manager at Dunham’s Sports in Baxter.  Santiago says he loves to work and is a hard worker but hasn’t for a while – he stays home to raise the kids and care for the needs of their second daughter.  What they want most of all from a Habitat home is stability and a sense of grounding in order to give the best they can to the three kids: Annette is 14 & according to Ashley “all of a teenager”; Apryl is 7 and receives special services at Riverside School in Baxter; Santiago JR is 3-1/2 and is one of the joys of their lives.